A rocky outfield situation in Colorado

A lot has been made of “The Coors Effect.” Some liken it to a hangover, though any Coors drinker will tell you that requires a lot of Coors to get you in such a state of disrepair. The phrase has usually been deployed to describe a dramatic road and home effect on Rockies’ hitters, but I’d like to focus on a different subject matter as it relates to how Colorado players perform differently in their constantly shifting environs.

Outfield defense, in particular range and positioning, has been subject to vastly differing levels of performance by Rockies outfielders depending on if they are in Denver or not.

All stats below are entering Tuesday

As you can see, the Rockies as a team struggled with shallow hit fly balls and line drives into the cavernous confines of Coors from 2016 to 2018. However, they mostly corralled the deeper hit balls in Denver, which makes sense conventionally– singles turn into doubles and doubles turn into triples.

The downside is that playing the outfielders so deep ceded so many plays in front of the Rockies’ outfield that there ended up being 34 fewer plays made than the league average.

On the road, it was a different story; the Rockies outfielders ended up preventing a significant amount of plays in front of them while ceding some plays on deep flies.

They had above average range and positioning on the road and were a whopping 40 plays better away from Coors from 2016-2018. Going into 2019, the Rockies seemingly made an effort to get better at reaching shallow balls into the outfield at Coors and deep balls on the road.

That’s reflective in the 2019 tables above, but as you can see they ceded so many more plays on the opposite ends of the spectrum–deep flies at Coors and shallow flies and liners on the road–that they’ve been worse overall at preventing runs with their outfield range and positioning.

There are additional reasons that the Rockies’ range and positioning has declined at Coors in 2019 apart from decisions about where to position their outfielders. The choice to make Ian Desmond the everyday center fielder has been much maligned by about every advanced metric available to evaluate defensive performance.

Desmond ranks toward the bottom of the list in outfielder jump and outs above average among qualifying outfielders on Baseball Savant, and he is dead last in Defensive Runs Saved (-19 Runs Saved) to date in 2019.

On the box and whisker plots below, the whiskers represent the overall range of the plays made or not made, and the line in the box is the average (mean) run value for a player on balls hit to him. 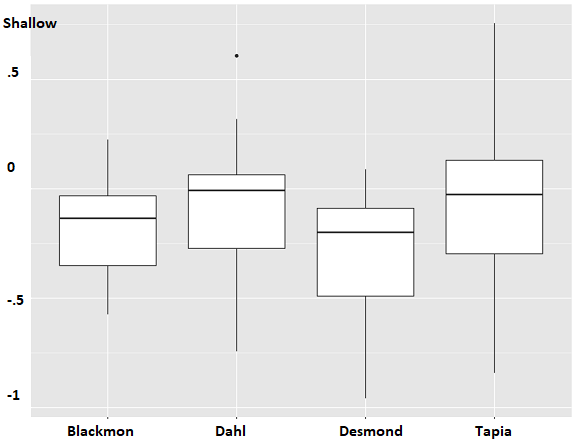 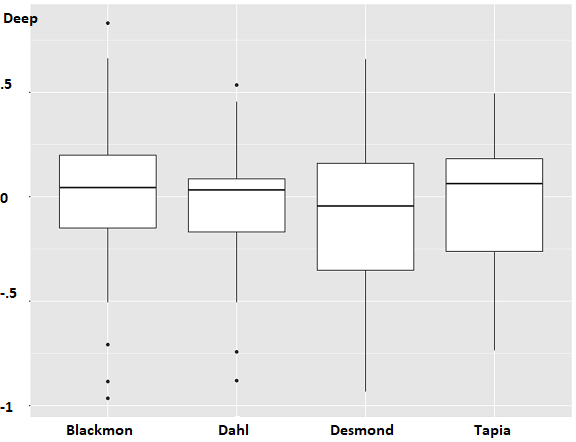 You can see that Desmond has essentially failed to make any play on shallow balls at Coors, and as a result, he loses about a run defensively on every five balls hit in front of him.

Conversely, younger and more fleet-of-foot outfielders David Dahl (who recently went on the IL with a sprained ankle) and Raimel Tapia have more or less held their own in making plays on deep and shallow balls at Coors. Neither are perfect fits; Dahl has a -10 DRS and Tapia has a -8 DRS on the year.

This speaks to a larger point about Coors; it’s an extraordinarily hard place to prevent runs, both on the mound and in the field. Over the 17 years Baseball Info Solutions has been keeping track of DRS, Rockies’ outfielders have been 371 runs below league average. That encompasses everything we calculate — range, throwing, and making good defensive plays while avoiding mistakes.

That’s the worst, and it’s not even close; the White Sox outfielders are 29th with 191 runs below league average, which is a 180-run difference. By Range and Positioning, the Rockies do move up two spots to a tie for 27th.

It’s always going to be an uphill battle to save runs in the outfield for Colorado at home, but it’s also imperative that they make the best decisions possible with so many runs at stake. While Dahl and Tapia aren’t going to be topping the DRS leaderboards, they could be better options to track down balls at a premium position than Desmond. The Rockies tried a different look in the outfield on their last road trip, moving Desmond to left and Dahl to center (Dahl subsequently got hurt and others have played center since then). It may be worth making that a permanent change.