Kyle Gibson’s slider has been vital to his success

By SEAN ZERILLO
Minnesota Twins pitcher Kyle Gibson has had a breakout 2018 season, posting a 3.27 ERA with a 1.17 WHIP (career 4.55 ERA, 1.41 WHIP) over 14 starts and 82 2/3 innings pitched. Gibson has bumped his strikeout rate up to 8.8 strikeouts per 9 innings (K/9) from his career mark of 6.2 K/9 entering the season, while upping the miss rate on swings against him from 22 percent to 26 percent from last season to this season.

Gibson’s biggest improvement this season has come against left handed hitters – against whom he owns a .336 weighted On Base Average (wOBA) with a 1.6 strikeout to walk (K/BB) ratio for his career (career .316 wOBA, 2.5 K/BB vs. righties). Against lefties in 2018, Gibson’s .279 wOBA essentially matches his .278 mark against righties, and his K/BB ratio has actually been better against lefties (2.4) than against righties (2.2).

The success is due in part to an improvement in Gibson’s slider, which he throws 19 percent of the time. Per Fangraphs, the pitch cost him nearly two runs in 2017, but this year Gibson’s slider has already saved him over six runs. If Gibson continues to have success with the pitch, the turnaround will be worth over a full win in slider value alone.

The difference in slider quality is a result of both improved command of the pitch and a narrowed focus on where to locate it. In 2018, Gibson has exclusively attempted to throw his sliders down and away to righties or down and in to lefties (view is from pitcher’s perspective):

Gibson has thrown 261 sliders in 2018, and the catcher’s intended target on those pitches has consistently hovered over the bottom left corner of the strike zone (from the pitcher’s perspective). In previous seasons Minnesota’s catchers would often set up for Gibson’s sliders a bit higher inside, or low and away to lefties as you can see in his 2017 slider targets below: 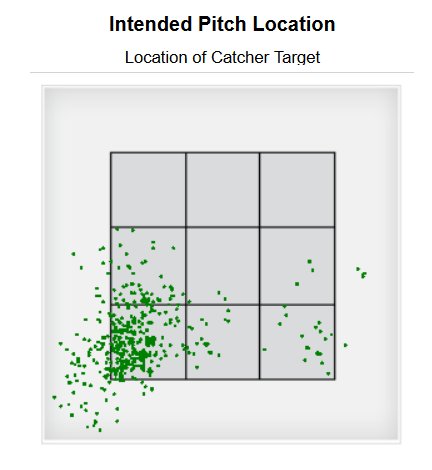 Simply put, the backdoor, down the middle, and middle-in sliders were not missing lefty bats. The revised strategy, which is to bury all sliders low and in to lefties or low and away from righties, has paid dividends.

Here’s how the swinging strike rate on Gibson’s slider has increased in the past three years against left-handed hitters (LHH).

Gibson has generated nearly as many swings and misses on sliders against lefties in 2018 as he did in each of the past two full seasons. Gibson’s command of the slider is also improving.

We chart how often catchers catch pitches In 2017 Gibson threw 72 percent of his sliders close or closest to the intended target.

Gibson generated swings and misses on 7 percent of sliders in that area of the strike zone in 2017 (six missed swings all season). This season, the whiff rate in that part of the zone is up to 40 percent (11 missed swings).

With improved control overall and a calculated approach towards locating what is likely his best pitch, Gibson looks likely to keep the gains he has made in 2018 – and he could continue to pitch to a sub-4.00 ERA moving forward as his 3.85 xFIP for 2018 would suggest.