BY SPENCER HARRISON
Before Jeremy Hellickson made his 2010 debut with the Tampa Bay Rays, he was considered one of MLB’s most promising pitching prospects. Through his first two full seasons he looked every bit the part, stringing together consecutive seasons of 2.95 ERA and 3.10 ERA pitching in 2011 and 2012, albeit with some concerning peripheral stats.

Then, in 2013, those peripherals caught up to him as his ERA ballooned to 5.17. Things have been mostly bumpy since then, with the exception of the 2016 season in which he pitched his way to a 3.71 ERA and a qualifying offer from the Phillies.

Still, coming off a season in which he posted his worst K:BB ratio since 2011 and career worsts in ERA and home run rate, there was little reason to believe he would turn out to be more than a depth signing when the Nationals added him on a minor league deal in March.

We’re now two months into the MLB season and Hellickson has flourished as the Nationals’ fifth starter. Through 43 innings, he has a 2.30 ERA, 5.7 K:BB ratio, and 0.93 WHIP. All of those marks would be career bests if sustained through the rest of the season. He has benefitted from some luck, but his 3.30 FIP indicates his early success is quite legitimate.

So how has Hellickson bounced back from arguably the worst season of his career?

His pitch usage this season offers some indication. His fastball usage has dipped from 46 percent in 2017 to 36 percent in 2018. Meanwhile his curveball usage has spiked to 27 percent, up from 13 percent in 2017. Compound that with a whiff rate on the pitch that is more in line with his career average (28 percent) then his 2017 season (15 percent) and things make a bit more sense. 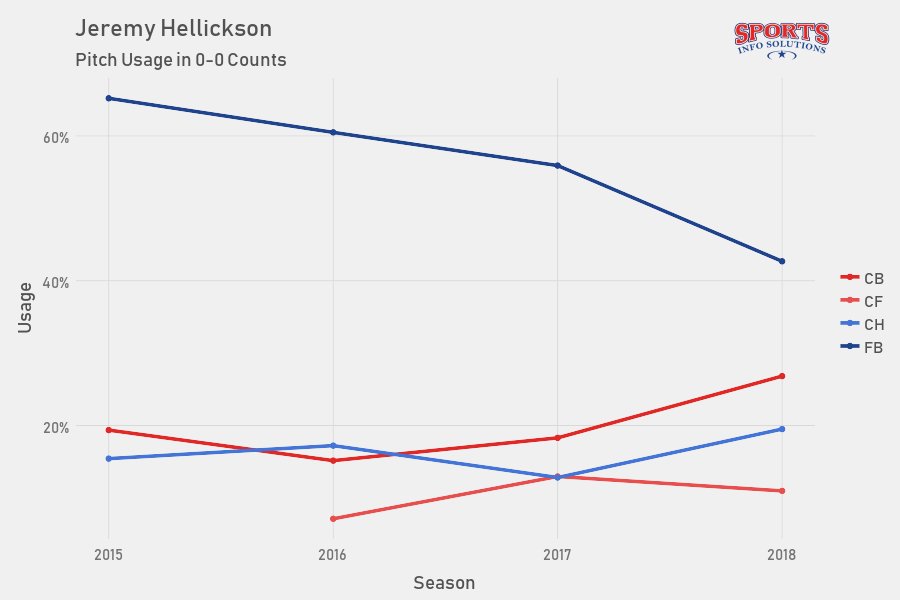 Yet Hellickson is pitching much better than his career average. What has really driven Hellickson’s success this season is first-pitch strikes.

Among pitchers with at least 30 innings pitched, Hellickson’s 70 percent first-pitch strike rate ranks fourth in MLB. This is another area where increased curveball usage has been of importance for Hellickson.

Hellickson has upped his first pitch curveball usage from 18 percent last season to 27 percent this season while his fastball usage is down to 43 percent from 56 percent in 2017. That change in strategy has paid dividends for Hellickson, who is converting 75 percent of his first-pitch curveballs into strikes (tied for second among MLB starters) and has a called strike rate of 67 percent (T-3rd in MLB) on the pitch. 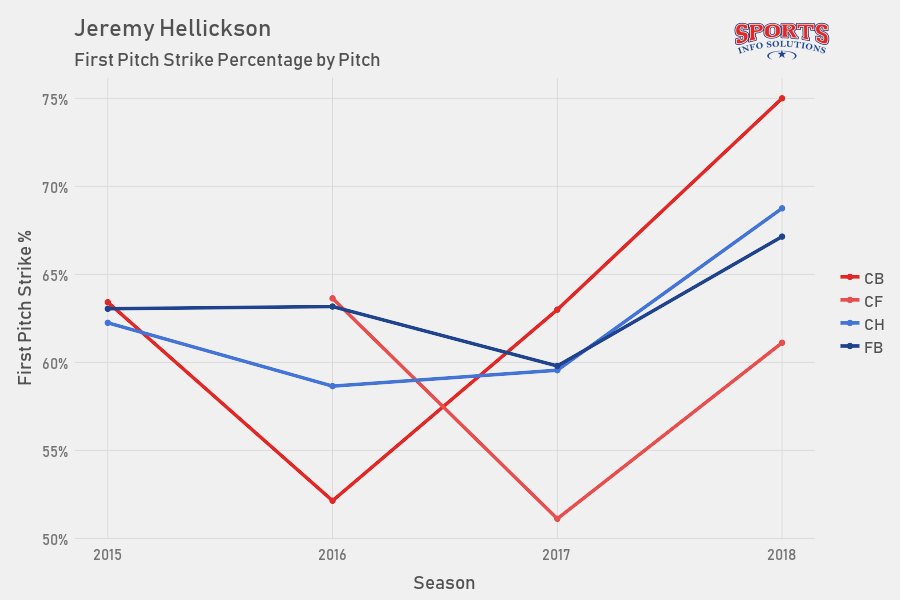 One final point of emphasis for the Nationals with Hellickson pitching seems to be getting him out of the game before he faces the opposing lineup for a third time. He has gone over the 90 pitch mark just twice this season, and has had three starts end with fewer than 75 pitches.

Stat of the Week